As I sit here and type this, this is my view….

(Yes, it’s the middle of the morning and I’m under a blanket right now. I’m one step away from heating up some Ovaltine. It’s cold here. Don’t judge. )

And as you notice I have my own personal leg warmer, my recently adopted dog, Zenzi. 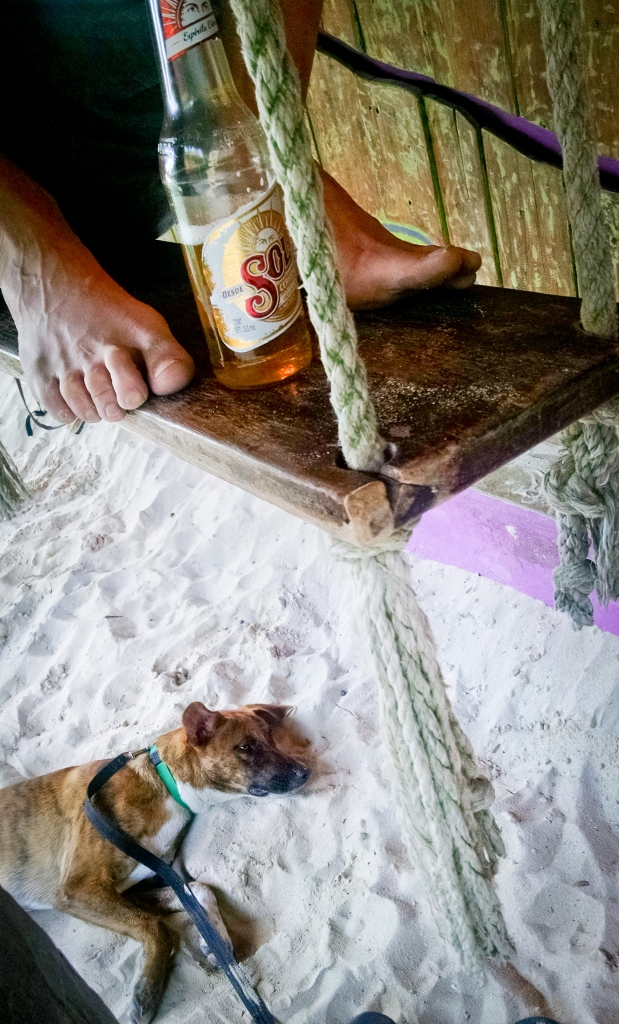 This particular doggie snooze was taken under my husband’s seat at one of our favorite bars in Playa Del Carmen, Mexico. A place called Lido’s, equipped with swings (why aren’t the more places like this? Do you know how much the fun factor of a place is raised when you can sit at a swing?!)  situated right on the beach, with a lovely view of those very blue, very lovely, caribbean waters. ahhhhhhh. Vacation. It’s delicious.

Before this, Zenzi was one of the over 50 rescued dogs residing at the S.O.S. el Arca, an animal shelter located in Playa Del Carmen. The shelter was made possible by the determined, love-fueled efforts of Sylvie Goetz. Goetz is a native of France, a resident of Playa, and a woman who seems to run on jet-fuel with as many tasks she is capable of juggling. And despite her jammed-packed schedule, Goetz assisted every way possible with the adoption; provided all the necessary paperwork, shots and a kennel for transporting on the plane.

The first spotting of Zenzi being walked along 5th Ave in Playa Del Carmen. Each night volunteers from the shelter walk a group of adoptable dogs along 5th to inform locals and tourists of the shelter. Zenzi definitely picked us. He ran up to my husband, and it was love at first sight. The next day, we went to S.O.S el Arca, located in Playa, in a space behind the local fire station. We took him to our rental for a “trial” run, and never brought him back.

S.O.S. is over capacity and looks for donations to help expand their facility. President Sylvie Goetz started the shelter in 2011 after visiting the local pound and seeing the need for a facility that could adopt the dogs out as well as provide education to familes about having a dog as a pet.

The shelter is split into large kennels where most of the dogs reside and one large “play” area. Larger dogs, dogs with behavioral issues, and dogs needing to be quarantined are shuffled into the smaller sections. The shelter needs funding for more room, as they are already over capacity. 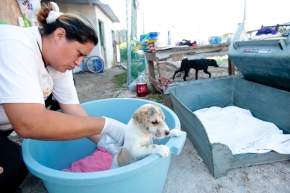 After being rescued from a garbage can, a puppy is treated for an infection by one of the S.O.S staff. 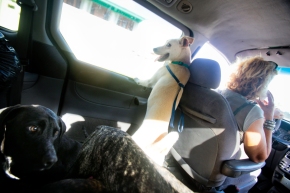 A typical Monday afternoon for S.O.S el Arca shelter president Sylvie Goetz, driving in her van, traveling to the vets office with dogs from the shelter in need of various levels of care. For some, a simple spay or neuter job. For others, tending to broken bones, infections, and disease. The vet used by S.O.S does all the work pro bono.

While one dog waits his turn on the floor of the vet’s office, a recent victim of a hit and run is restrained before receiving an injection to assist with the healing of where he had his leg amputated.

Alan, one of the S.O.S. employees, is watched carefully as he grabs a leash for Zenzi. The shelter is run by the efforts from employees and volunteers. 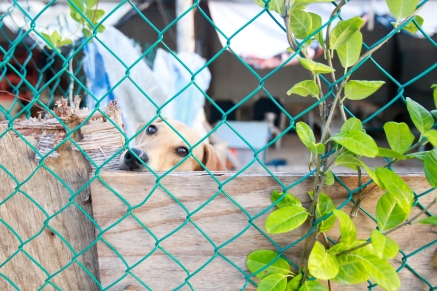 One of the many faces of the shelter, looks out from one of the main kennels.

One of the volunteers from S.O.S provides a head rub to one of the dogs kept separated due to needing special care.

So after spending the rest of our vacation with us, Zenzi was loaded up on American airlines and brought to live with us in the Chicago suburbs. This was NOT a planned part of our vacation. But it became one of our favorite parts. Don’t get me wrong, I was a little worried that the poor guy would get off the plane in Chicago and wonder why on earth these stupid gringos decided to drag his skinny perro butt to the frozen tundra. But as you can see, he’s adjusting quite well. He actually loves the snow. His attitude is one of the reasons we fell in love with him. He honestly seems so…grateful. And who doesn’t need a little reminder of that in their lives? A little Zen, a little love for life, a little Zenzi. 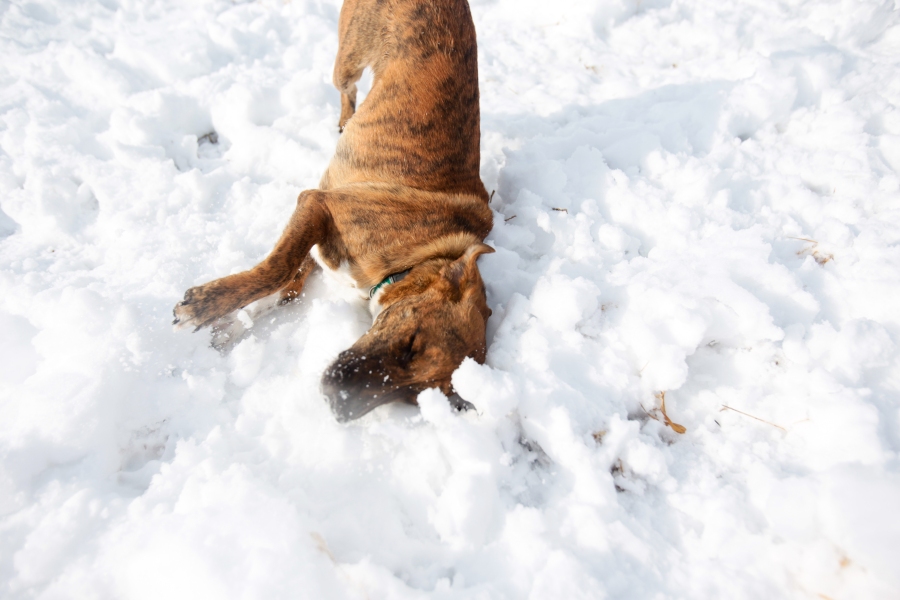